Attack on Mohamed's tomb could stir up sectarian hatred 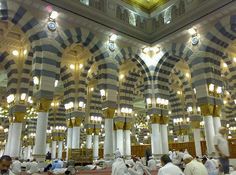 From the earliest period of Islam, it has been a common practice to pay respects to the Prophet Mohamed and visit his tomb.

Muslims refer to Mecca and Medina as “the two sanctuaries”, and many combine their hajj pilgrimage to Mecca with a visit to the Prophet’s mosque in Medina. There, alongside the prayer area and the Prophet’s pulpit, is the chamber housing his final resting place – where he was buried in 632.

It has also long been controversial, however, due to Islam’s rejection of idolatry, rooted in the firm monotheism laid out in the Koran. Do the prayers performed at the tomb amount to the worship of the Prophet? If so, then they contravene the fundamental Islamic message that God alone is worthy of worship.

Visiting the Prophet’s tomb was clearly popular in the first centuries of Islam, and a building erected over the tomb was first reported in the seventh century, soon after the Prophet’s death. Nevertheless, there has remained a worry among some scholars that the rituals at the Prophet’s tomb were suspect at the very least, and potentially dangerous heresy.

A small but vocal opposition to visiting the tomb existed through the centuries among Sunni scholars, but this became a major political issue only with the rise of the puritanical reform movement known as Wahhabism. Named after its 18th-century founder, Ibn Abd al-Wahhab, Wahhabism viewed any elaborate buildings over grave sites as an invitation to idolatry. To its followers, the prayers uttered at these tombs were a denial of God’s absolute omnipotence.

The 19th and 20th centuries witnessed the Wahhabis, in alliance with the House of Saud, leading the destruction of the tombs of notable Muslim figures.

The great Saudi financial resources have enabled the spread of Wahhabi doctrine beyond the Arabian peninsula in the past 50 years. But while the Wahhabis themselves are virulently Sunni, opposition has come from both Sunnis and Shia. Visiting the Prophet’s tomb has proven so popular among both Sunnis and Shias that it has thwarted all past Wahhabi attempts to end the practice and demolish the tomb. The Saudi royal family prizes its role as guardians of two sanctuaries, believing it gives them a position of religious leadership and responsibility throughout the Muslim world.  Destroying the tomb would, in the past, certainly have led many to question their leadership.

Perhaps, as part of the complex power relations within the kingdom, the Saudi authorities see a political opportunity: the destruction of the tomb, or stricter controls on the activities of the pilgrims there, might appease more strident Wahhabi opinion, both internally and internationally.

Yet such a move would run counter to the religious practice of most Muslims, Sunni and Shia, across the centuries. Most dangerously, an attack on the Prophet’s tomb will play into the hands of sectarian actors, who use theological difference as the engine of hatred and violence.

The writer is director of the Islamic Reformulations Project at the University of Exeter. Andrew Johnson : Senin 1 September 2014 - Independent